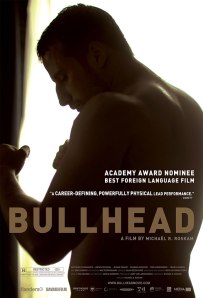 A Flemish cattle farmer Jacky Vanmarsenille (Matthias Schoenaerts) has been a part of an illicit procedure where the livestock is injected with steroids and other growth hormones, a practice he learned from his father. Problems arise when an old acquaintance Sam Raymond (Frank Lammers) encourages Jacky to get involved in a deal with a notorious West-Flemish beef trader Renaat Maes (Hein van der Heijden), who is looking for a new supplier, and a policeman investigating the steroid scandal is shot dead.

Through the bungling efforts of brother car mechanics Christian (Erico Salamone) and David Filippini (Philippe Grand’Henry) and his own brother Stieve (Kristof Renson), Jacky finds his past catching up with him leading to his present life collapsing around him.

Belgium’s entry for the Best Foreign Language Oscar Film in 2012 gets a belated UK release but it was worth the wait. This remarkable debut outing from Michaël R. Roskam is based on the real life killing of a Belgium detective Karel van Noppen in 1995 who was investigating the animal steroid phenomenon.

Roskam uses this story as a backdrop for a gritty and unflinching drama that not only exposes the nefarious practice of hormone tampering on animals but also creates an incisive character study of the Belgium criminal underworld, with deeply upsetting backstories for the main players.

The two elements shouldn’t really overlap with any sense of coherence but they do thanks to a horrific incident in Jacky’s past. To go any further as to what happened will cause a few male eyes to water (it involves rocks and young Jacky’s nether regions) which resulted in Jacky having to take growth hormones.

His shady sideline in animal tampering means he gets to siphon off some of the steroids for his own use, with naturally terrifying side effects. Initially Jacky seems reticent and shy but through his steroid intake and the shocking revelations of his past, his moody demeanour is somewhat understandable.

Despite being the central character Jacky feels almost like a bit player in his own story as the focus often remains on the shady meat deals, of which his part is fairly minimal. Taking the spotlight here is Jacky’s childhood friend Diederik (Jeroen Perceval), who also witnessed the horrific incident way back when, the man brokering the deal with Maes. The deal almost seems doomed from the start when both sides express their distrust of the other – the Belgiums refer to the Flemish as fascists while the Flemish resent the Belgiums speaking in French.

Their paths cross beyond dodgy meat trading when Maes takes a car to the Filippini’s garage and instructs them to make it disappear or else. They accept the job until a TV news report about the detective’s murder and a bullet hole in the side of the car gives birth to a crazy idea of screwing Maes over.

But their plan involves new tyres which end up on the car of Jacky’s brother Stieve and are then repossessed by the Filippini’s means someone is going to get hurt. Elsewhere the police are onto the gang thanks to their ineptitude and via Diederik’s informer relationship with a female detective Eva Forrestier (Barbara Sarafian).

Admittedly the above plot summary makes this sound like a confusing mess but the reality is that it is much easy to comprehend when viewing the film. Roskam manages to keep all the concurrent and retro story threads neatly intertwined within one another without fear of losing the viewer’s attention, but with such gripping presentation that never happens.

The criminal underworld of Belgium may lack the panache of say the Mafia or the Triads but the tension of the meetings between Maes and the Belgiums is palpable; the setting of a simple civil steak meal feels like a proverbial powder keg awaiting the flame to touch its fuse.

Ultimately this is about Jacky’s descent into personal steroid assisted hell. The nightmare childhood incident has had an obvious effect on his confidence around women, which is brought to the fore when local chemist shop assistant Lucia Schepers (Jeanne Dandoy) catches Jacky’s eye and his attempts to chat her up result in the sale of some unwanted aftershave. However Lucia is not a random target for Jacky’s attention, a fact she remains blissfully unaware of.

For the role of Jacky, Matthias Schoenaerts – who we last saw wooing Marion Cotillard in Rust And Bone – had to bulk up with nearly five stone of muscle in order to appear genuinely beefy. This adds so much to his already complex character who looks like he can rip your head off but would probably cry with regret on the inside afterwards.

Actually that isn’t strictly true as we find out but behind the muscle is a tortured soul with touches of a regressive child who is unable to makes sense of the world in terms other than his own. Schoenaerts delivers a compelling performance that reflects the trauma that surrounds his hulking presence, creating a believably flawed character that has the ability to engender sympathy and disgust in equal measure.

At 129 minutes there is room for a bit of trimming as the late second act is a tad flabby, but Bullhead is an impressive debut that will ensure lingering memories (albeit unpleasant ones) while showing promise for director Roskam as a bold new voice in European cinema.