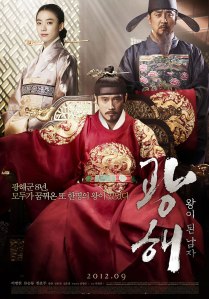 In 1616 King Gwang-hae (Lee Byung-hun), 15th ruler of the Joseon Dynasty, orders Chief Secretary Heo Gyun (Ryoo Seung-ryong) to find his exact double out of fear of assassination attempts. One is found in the form of Ha-sun (Lee Byung-hun), a lowly and crude entertainer, who is enlisted to substitute for the king during the night.

On the second night, the king is drugged and his sickly body hidden away from sight with only a few trusted people in the know, including Heo Gyun and Chief Eunuch (Jang Gwang). Ha-sun is called in to portray the king on an interim basis while he recovers but Ha-sun’s light hearted and more humanitarian personality becomes the cause of much suspicion in the royal court.

A huge success in its native South Korea, Masquerade is now the fourth highest grossing film in Korean history. It an ambitious film especially for director Chang-min Choo, whose prior work has seen him remain largely on the periphery of the big leagues of Korean cinema.

Naturally, this lavish historical costume drama changes that. While the story may take its cue from the classic Prince And The Pauper, it is in actual fact and bold and purely fictional attempt to fill in the blanks of the missing fifteen days of the journals recording of the life and reign the real King Gwang-hae in the Annals of the Joseon Dynasty.

A mix of political intrigue and human interest drama, the story sees Gwang-hae under pressure from his advisors, most notably Interior Minister Park Chung-seo (Kim Myung-gon), to sanction the death of Gwang-hae’s own brother-in-law Yu Jeong-ho (Kim Hak-jun), who has been accused of treason. Ha-sun is forced to take over as a puppet king with the decision about Yu still up in the air, but when he becomes smitten with the Queen Consort Joong Jun (Han Hyo-joo), he vows to have Yu released.

Meanwhile, Ha-sun’s ignorance of politics and regal protocol allows Heo Gyun to enforce policies contrary to Park’s wants, including the refusal Yu’s execution. When the subject of a new taxation plan arises Ha-sun gets behind it wholesale after talking to a young food taster So-wal (Shim Eun-kyung), whose father was killed for being unable to pay his taxes.

This change of heart and personality initially raises a few eyebrows in the court but over time, Ha-sun’s simple acts of consideration for the staff and the poor people of the country, as well as his genial courting of the Queen puts the monarch in a more positive light than before. Until Gwang-hae recovers from his illness that is.

At 131 minutes this may sound like a slog of a film but the time flies by and Chang-min Choo manages to inject some cute humour into the proceedings. When first settling into the role of king, Ha-sun’s discomfort with being molly coddled by the royal staff, even when using the toilet, may seem incongruously inappropriate but amusing none the less, and lifts the mood beyond the heavy and frequent use of dark lighting that is prevalent throughout the film.

Even then, the dimly lit scenes never fail to disguise or diminish the vibrant colours of the costumes or the splendid opulence of the set pieces, all of which have been lovingly reconstructed with impeccable attention to detail. Equally replicated with startling accuracy are the various functions and protocols of the servants and advisors of the royal court, all acted and shot with flawless precision and dexterity befitting the rigidity of this demanding period of time and place.

With the visuals are lush and sumptuously presented for our delectation, Choo is aware that the story is the heart and soul of this film and thankfully resists the temptation to employ CGI and overt techniques to keep the audience spellbound, relying as every good filmmaker should, on the power of the performances and a well written, intelligent script.  Choo has both at his disposal and makes exceptional use of them.

The script and dialogue is witty, scathing, observational and full of heart, resplendent with the nuances of the period making it feel legitimate and not forced. The story runs in a fairly straight line, reminding us that you catch more flies with sugar than with vinegar, but the revival of Gwang-hae and the changed attitudes of many people of the royal court and across the land bringing with it a new sense of tension and drama heading into the final act.

Lifting this film beyond the norm of the genre is the outstanding performance of Lee Byung-hun. With a history of playing violent killers, policemen and other physically demanding roles to his name, Lee is forced to dig deep to pull off such a demanding and often emotional role which he does with aplomb. He nails the two clashing demeanours to make both characters distinctive and believable leading to what must be his most refined and accomplished performance to date.

Even if he returns to the action roles he is noted for, Lee can rest assured he has shown the world he can act and deliver the goods with the best of them. However this is not a one man show as the support cast are on par with Lee and compliment his role(s) with their own astute essaying of their characters.

Masquerade stands as the first historical drama to come from Korea in a long time that deserves your attention. Its ambitions are met head on and the results are rewarding for both the audience and everyone involved in making it. This is very much a substance AND style production which should restore people’s faith in Korea’s output within this particular genre.