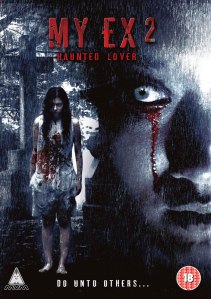 Aspiring actress Cee (Ratchawin Wongviriya) just happens to see her boyfriend Aof (Thongpoom Siripipat) with another woman, Ying (Marion Affolter) whilst at the cinema (watching My Ex as it happens). After Ying overhears a blazing row between Aof and Cee in which, she is seen falling to her death from the building roof. Aof continues to pester Cee, so she flees to a nearby island with her sister Bowie (Atthama Chiwanitchapan) and her friends where the sequel to My Ex is being filmed, in which Cee has a role. However everywhere she goes Cee is haunted by the presence of Ying’s ghost.

While most of Asia seems to have moved on from the vengeful ghost concept for their horror films, Piyapan Choopetch must have struck gold with My Ex domestically to warrant this sequel, since it hasn’t exactly set the world alight outside of Thailand, and this follow-up is less likely to alter that. For anyone who has seen the first film this is essentially a re-run story wise with the cheeky twist of being “a film within a film” – the film being the very sequel to the film this is the sequel of. Got that? Got things are about to get more convoluted.

Bowie is an actress and gets Cee a role in the My Ex sequel. The film is being shot on a resort owned by Bowie’s rich boyfriend Karn (Pete Thongjua), who is also producing the film. Since it is a horror film being shot Cee gets the benefit of Ying’s omnipotent ghostly presence to help her deliver a truly convincing performance. Such is the power of Ying’s haunting skills, Cee finds it difficult to tell what is real and what is fantasy, which becomes an overused plot device to confuse the viewer too. And if that wasn’t enough Cee becomes embroiled in her second love triangle as Karn makes his move on her behind sister Bowie’s back, the cad.

So far, so what. In the wake of the apparent success of My Ex Piyapan Choopetch must have decided the focus for this follow-up would go on the photography and not the script. Actually, that is a little unfair as there is a neat and unexpected twist that takes the final act into a fresh direction but sadly the pay off is something of an anti-climax. However, everything leading up to this plays out just as you would imagine with all the clichés you can name that have appeared in Asian horror films since the mighty Ringu rewrote the rule book in 1998 present and correct. It’s because of these clichés that the film is light on actual scares and horror with Ying’s death being the closest to a truly shocking visual, otherwise the 18 rating this film has been given is woefully excessive for such a tame outing.

Making this scare free experience a bit more bearable are the visuals. The pseudo tropical setting for the film shot is allowed to shine in all its glory, suggesting an inviting locale for the audience to put on their next holiday destination list. Conversely some nifty camerawork during the night time scenes helps create a sinister atmosphere, reeking with a sweaty dread and skin crawling creepiness. Choopetch also tries to open an account as an artistic filmmaker, with the occasional and often baffling use of slow motion shots and fancy camera angles, in what feels like a vain attempt to try and lift this film out of the staid horror genre and into something more highbrow.

Equally delightful to the eye are the female cast, although it becomes quickly apparent their looks are solely whey they were hired since acting isn’t their strongest asset. Leading lady Ratchawin Wongviriya appears to have just one facial expression which I can’t decide if it is supposed to register confusion or wind. Even when she is faced by the spectral apparition of Ying’s bloodied corpse, Wongviriya gives the same dumbfounded reaction as a TOWIE cast member attempting the recite the alphabet. As for the male cast it’s fair to say they set a new standard in blandness that makes Aussie soaps seem like Shakespeare.

While not essentially offensive or explicitly bad in any traditional sense, My Ex II falls short for not being particularly original or scary thus doesn’t offer the viewer any real incentive to stick with it. The twist in the final act answers a niggling key question that arises almost immediately following Ying’s death but the awkward and clumsy resolution serves only to harm it. And if that wasn’t enough, a post credits coda seems to hint strongly to a third film coming our way. To be honest, unless the shortcomings of this film are addressed and acting upon, I’d rather say “No thanks” right now.

An unnecessary sequel that doesn’t fulfil its horror remit, My Ex II should be a last resort viewing choice only.