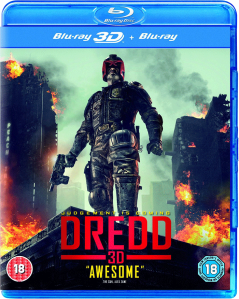 In a futuristic, post apocalyptic America is the metropolis known as Mega-City One where criminals rule the streets via violent methods. To uphold law and order with equally violent mettle are Judges, who are afforded the powers of judge, jury and executioner if necessary. The most dangerous and feared of them all is Judge Dredd (Karl Urban) who is giving a new recruit to break in, psychic mutant girl Cassandra Anderson (Olivia Thirlby). Their adversary is the vicious Ma-Ma Clan, headed by former prostitute turned drug lord Madeline Madrigal aka ‘Ma-Ma’ (Lena Headey), who have been circulating a deadly drug called “Slo-Mo” around the streets. While on call to the Peach Trees tower block where Ma-Ma resides, Dredd and Anderson capture a member of Ma-Ma’s gang, forcing Ma-Ma to order a complete lock down on the tower block until she gets her man back, putting a bounty on the Judges’ heads.

The legendary cult comic book hero Judge Dredd, created by John Wagner and Carlos Ezquerra who appeared in British comic 2000 AD, was given the big screen treatment in 1995 starring Sylvester Stallone and was not that well received. British director Pete Travis was given the task of washing away the sour taste of that maladroit version to present a film that stayed trued to the vision and content of the original comic strips. Not having read them myself or seen the Stallone version I can’t say if he succeeded or not but I am willing to bet this is the case. However I have seen Indonesian martial arts corker The Raid and couldn’t help but notice some similarities in the plot – okay a LOT of similarities in the plot.

A tower block controlled by a drug lord? Check. The law serving protagonists having to work their up the tower block to catch the drug lord? Check. Having to fight armed thugs on every floor of the tower block? Check. The major differences between the two films are that this one has a well known lead character and the budget is a little higher (to the tune of $34 million!). Perhaps it isn’t fair or particularly beneficial to keep making comparisons so we’ll leave them there and get back to discussing this film on its own merits.

In keeping with the action film genre there is no moral message or didactic motive to the story, just a stoic, no-nonsense futuristic lawman blowing up bad guys in the most graphic violent fashion possible. Unlike other cinematic lawmen who are restricted by moral enforcements of human rights and other similar statutes, the Judges of Metro City One have no such limits: if they have to kill they can and there will be no recriminations. When we first meet Dredd he is chasing a gang of druggies through the city on his motorbike who he despatches with ease, except for one who escapes on foot to a nearby shopping mall. The man resists arrest to Dredd blows him to smithereens – just like that. And so the film starts as it means to go on.

Psychic rookie Anderson is on hand to provide the emotional content of the duo since Dredd is all business, but she is just as flawed, trying to earn her stripes with Dredd letting her decide the course of action without exploiting her telepathic abilities. However they come in good use later on when their Ma-Ma Clan captive Kay (Wood Harris) tries to play some tricks with her. To say revenge is sweet is an understatement. Ma-Ma herself is a deeply unpleasant woman who seems to instil fear into even the biggest and toughest of men. Facially scarred from her prostitution days for which she was jailed when she extracted her revenge, Ma-Ma would a good Judge since she executes people with no contrition whatsoever. Skinning people then throwing off the tower block balcony is her speciality.

In case you hadn’t guessed by now, this film is exceptionally violent and the use of CGI technology allows for the explicit depictions go beyond the norm here. You will see heads blown to bits, a face torn apart by hail of bullets in slow motion and other similarly gruesome visuals. It is all impressively rendered and will satiate the most ardent and bloodthirsty gore fan but it has that sense about it that they did this because they can and not because it adds anything of intrinsic value to the film. Of course it is not really a point worth complaining about, rather an observation to be made about how much is too much before it becomes ineffective or gratuitous. The CGI is also employed to great (read: constant) effect to simulate the experiences of the Slo-Mo drug, creating a trippy environment for the viewer to be temporarily dragged into.

Again having not seen Stallone as Dredd I cannot comment on his essaying of this iconic character although I would assume his monosyllabic style would fit the droll, one liner dialogue. Karl Urban though seems to be suitably gruff and emotionally detached in his portrayal and it wouldn’t surprise me if he ends up being the “definitive” Dredd for modern movie fans. The ending leave things open for a sequel is but amazingly this film didn’t set the box office alight – possible due to the adult rating – so maybe fans will be left hanging after all.

I won’t lie to you, I enjoyed The Raid more as its low budget, no frills, no CGI, wire free action felt more real to me than this overdose of big budget frippery but Dredd is a huge fun slice of mindless mayhem in its own right. In world where comic book adaptations try too hard to be glossy and spectacular it is refreshing to have an occasional dose of gritty, in your face chaos to sit back and enjoy. To that end Dredd fits the bill perfectly.