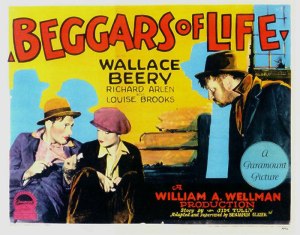 A hobo named Jim (Richard Arlen) wanders up to a small farmhouse looking for something to eat. Instead he finds a man who has been shot in the head. The culprit was the man’s adopted daughter Nancy (Louise brooks) whom he had been abusing and his death was the result of Nancy protecting herself. Knowing the trouble she could find herself in, Jim has Nancy dress as a young boy then helps her get away by train hopping with him en route to Canada. But if the police don’t get them the other hobos will.

Based on the novel Outside Looking In by hobo writer Jim Tully – a stage version of which Louise Brooks saw starring a young James Cagney – Beggars Of Life was one of the earliest films to experiment with sound in the wake of The Jazz Singer a year earlier, albeit limited to a few lines of dialogue. However it remains a recognised silent classic with prints of this film with sound as rare as three headed flamingo. The film is also noted as being the penultimate film, Louise Brooks made in Hollywood before walking out and into cinema history by starring in G.W Pabst’s seminal Pandora’s Box and Diary Of A Lost Girl.

Criticised by some at the time for glamorising the life of the hobo and for trying to creating sympathy for a murderess, the story is ultimately one of dreams, survival and a code of honour among an easily maligned section of the community. She may have pulled the trigger but Nancy was the victim but in the eyes of the law and with no witnesses to corroborate her story, she is guilty as charged. Being the itinerant sort Jim is quick to encourage Nancy’s escape, giving her the identity of his little brother as they make their way cross country towards Canada. It is after seeking shelter among a group of travelling hobos that Jim and Nancy meet The Arkansaw Snake (Robert Perry) who terrifies Nancy until the charismatic brute that is Oklahoma Red (Wallace Beery) shows up. Snake soon figures out Nancy’s true gender (when she bends over no less!) but big hearted Red says she can stay, causing a huge rift among the group. Yet it is this rift that brings out the camaraderie of the hobos as they rally round the young runaways to hinder the police who are closing in on them.

The major thing that one takes away from watching this film is just how much of a missed opportunity the superstar career Louise brooks should have had in Hollywood was. As we all know Brooks didn’t (read: refused to) fit in with the Hollywood machine so it took the two films she made with Pabst in Germany to fully realise her potential and unleash her obvious talent. If there was ever a portent of things to come, her performance in this film is it. Even with third billing under Beery and Arlen, Brooks is the one that captures your attention and holds it until the end and not just because she is the loan female cast member. She is enigmatic, beguiling, sympathetic, feisty, comedic and above all honest. Everything she does is natural and realistic (except maybe portraying a young boy as no-one that stunning could look anything other than a goddess) which suits the stripped bare, nomadic lifestyle of the hobos the film portrays. For many this non-glamorous role didn’t sit well with some of Brooks’s fans but she was always up for the challenge of doing something different from the norm. She even did most of her own stunts when jumping onto the moving trains.

Wallace Beery – the one who got to test the uncharted waters of sound for Paramount – delivers another commanding performance as per his lofty reputation while Richard Arlen, who starred alongside Clara Bow in Wings a year earlier, also directed by William A. Wellman, is an equally solid good guy lead. One interesting secondary character is Black Mose (Edgar Washington Blue), whom you probably have guessed is of ethnic origin yet contrary to the usual exploitation and derogatory roles they were usually lumbered with, Mose is quite a dignified and pivotal character to the well being not just of Nancy and Jim but all of the hobos, including Red. Okay, he’s portrayed as a little slow but it’s a start. To add extra authenticity, some of the extras were genuine hobos, hired for the price of liquor!

The story may be simple but Wellman was able to create a solid paced intense drama out of it, with the scenes involving the trains benefiting from some superb and innovative camerawork – shot on the genuine San Diego-Yuma railroad – that takes the viewer into the heart of the journey. This print I watched wasn’t the greatest but the quality of the photography still shone through. Tully’s story isn’t a pleasant typically happy ending type of film Hollywood is used to churning out and is all the more exciting for it, with a slightly cheeky ending.

It may have marked the beginning of the end of Louise Brooks’s Hollywood career but Beggars Of Life also serves as a powerful and poignant reminder of what could have been if both she and Hollywood could have met halfway in their various disputes. And those who only know her two German made classics should delight in seeing where the seeds for those two sublime performances were first planted.