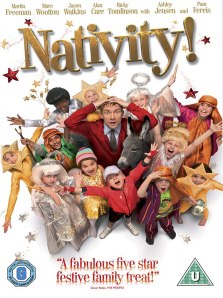 Primary school teacher Paul Maddens (Martin Freeman) is appointed the task of helming the annual nativity by incumbent headmistress Mrs. Bevan (Pam Ferris). After being teased by Gordon Shakespeare (Jason Watkins), the music master at a private school school whose nativities are the stuff of legend, Paul falsely boasts that his ex-girlfriend Jennifer Lore (Ashley Jensen), now a Hollywood film producer, is returning to see the play to turn it into a film. Unfortunately Paul’s classroom assistant, the childlike Mr. Poppy (Marc Wooten) overhears this conversation and decides the whole world should know, putting Paul under great pressure to live up to his promise, especially since he and Jennifer haven’t spoken in ten years.

With Nativity! it seems us Brits were trying to blend a traditional British yarn with a aq belated nod to Jack Black’s School of Rock with the exhuberant feel good final act. With its modest production values up until this point, there is little to separate this from your average British TV movie, largely though the main cast being familiar UK TV faces (although Martin Freeman’s profile will have expanded on a global scale thanks to The Hobbit). It’s a fairly lightweight fare as you would imagine since the target audience is the whole family and cast of youngsters, so to expect it travel down anything but safe avenues is sheer folly.

The closest it gets is through the eccentric idiot savant Mr. Poppy, a big chap who acts and connects with the kids on the same level of maturity and intellect (despite being able to drive), whose wild and progressive ideas are warmly welcomed over Paul’s stuffy and conventional plans. For Paul this play becomes a matter of pride as he Gordon and Jennifer were once a trio of aspiring performers before their lack of success forced them to get “proper” jobs. Subsequently Paul’s first attempt at the nativity received a scornful minus two star review from local newspaper critic (Alan Carr) while Gordon’s was awarded five stars. It was hubris and desperation that forced Paul to lie about Hollywood’s interest in the play, but once word got around, Paul becomes a local hero for bringing Tinsel town to this modest English hamlet.

Besides this little white lie escalating to epic proportions against Paul’s best efforts, there is a subtext about the innocence of children in the pursuit of realising dreams. Having been overheard admitting his class were useless when offered the nativity gig, Paul is faced with a group of downcast kids who are ready to admit defeat despite being quite keen to show their stuff in front of the Hollywood scouts. This is the basis for the emotional/sentimental strand of the tale and what playing in a key role in the play means for the youngsters, as much as it provides the comedy. One young chap in particular, Bob (Ben Wilby) is an absolute hoot as the tiny wannabe with his hip, street speak and mannerisms.

While staying on this path, the film is serviceable enough but when it tries too had to tug on the heartstrings, it falls flat. The scene of Jennifer welling up over a video of the class pleading with her to give Paul a second chance is far too contrived, ending up more of a mood killer than anything else – unlike Paul’s tender moments when he realises what is at stake for the kids which contextually have more meaning, since Jennifer amicably walked out on Paul many years before.

The success of the film rides on the appeal of the kids who after being told they are no good, even by Paul, grab this opportunity to do something significant and make everyone and themselves proud. Unlike Tinsel Town’s teenies these youngsters aren’t forced to be cute and instead their roles are kept natural so you either relate or empathise with them or you don’t. This makes the comedy work so much better as the delivery of the lines could have been delivered by one’s own offspring, such is the charm of their personalities, managing to eclipse Marc Wooten’s regressive behaviour, as he relieves the youth of every adult of a certain vintage watching (if I say parka jacket round the neck as a cape, some of you will already be having nostalgic flashbacks).

The final act when the show takes place is the big feel good climax that you knew was coming and frankly the film had to deliver – anything else would have been suicidal for this film. Granted it takes a few liberties with the production values for a school presentation pushing this closer to the Hollywood ideal for such a payoff, but escapism is the key here so to take this too seriously would be churlish. At least its tongue is still firmly in its cheek making it a lot of fun.

Nativity! is a film that one can only take at face value and not have too high expectations for. It’s a gentle, charming and acceptable slice of seasonal family entertainment and passes the time pleasantly enough, especially during the festive period.