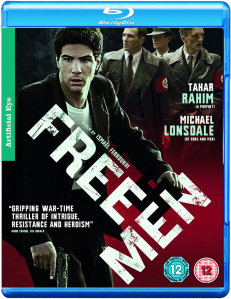 In occupied Paris, 1942, an Algerian immigrant Younes Ben Daoud (Tahar Rahim) makes a living selling black market goods to fellow immigrants with the intent of returning home with enough money for his family. A police raid sees him forced into playing the role of informant for the authorities, tasked with infiltrating a Paris Mosque and spying on the rector Si Kaddour Ben Ghabrit (Michael Lonsdale), who is suspected of supplying false documents for Jews declaring them Muslim as well as harbouring some at the Mosque. Younes proves not to be spy material and is quickly dismissed but his encounter with Salim Halali (Mahmoud Shalaby) an Arab club singer sees Younes join Rector Ghabrit’s resistance campaign against the Nazia as the net closes in on them.

World War II has proven to be a very fertile source of inspiration for European cinema with numerous films set around this period, both fictional and based on fact, hitting the big screen over the past decade. France has been one of the more prolific in dealing with this subject, largely eschewing the bombast of the battlefield in favour of the human interest aspect of the conflict, understandably finding a wealth of material in their countries own occupation by the Nazis. Free Men continues that trend, its fictional account based on genuine people, places and anecdotal accounts of incidents from this period.

Si Kaddour Ben Ghabrit and Salim Halali both existed as did the Paris Mosque which served as a refuge for Jewish and Muslim Algerian immigrants. Younes is a composite of many of the people who helped the cause. The police and Nazi’s suspicions about the activities at the Mosque were of course completely accurate, as having false documents claiming they are Muslims saved a number of Jews from the persecution and execution at the hands of the Germans. In this account, the wily Rector Ghabrit knows the Nazis are onto him but is canny enough to outwit them on a regular basis, so spotting Younes lurking around and correctly assessing his motives was hardly a taxing achievement. With his own cousin among those hiding in the Mosque, Younes uses his street smart guile to help the Rector’s cause to get papers to help Jewish families escape Nazi persecution.

In the middle of this is singer Salim Halai with whom Younes strikes up a friendship after also being on his spy list from the police. Since he can sing in Arabic Salim is usually above suspicion and Younes doesn’t suspect anything until much later when he discovers that Salim is not only Jewish but also gay! This is essentially the catalyst for the apolitical Younes joining the resistance with the ensuing experiences only strengthening his resolve, his actions becoming increasingly risky and more committed as time passes on, equally spurned on by the mysterious Leila (Lubna Azabal), a implicit influence on Younes.

For many, especially outside of France, the incidents this film is based around is one that has slipped under the radar while many other tales of French based Jewish persecution have been well documented. Ismaël Ferroukhi seeks to rectify this with Free Men and for a piece of fact based fiction, it carries itself with plenty of credibility, avoiding the temptation of manipulating the audience with forced sentimentality in favour of engendering emotion through the storytelling and drama. However for a war based film, anyone expecting explosive battle scenes will be disappointed. There is only one shoot out in the whole film in the sole action scene; the remainder of the story focuses around the cat-and-mouse games played between Ghabrit and the authorities.

If there is one thing lacking here it is tension. Even the brief car chase that leads to the aforementioned shoot out is over before it begins and doesn’t carry much in the way of excitement. And with a central tale of evading the enemy again this aspect is vastly understated and underplayed with little in the way of heart stopping moments which see the protagonists in potential danger; all resolves are swift and relatively pressure free, resulting in a non-climax as the film just sort of ends with no overt sense of achievement or success in their life threatening plight. The 99 minute runtime should be sufficient enough but a lot of the time is taken up with meandering scenes that could have been better allocated to more examples of the struggle of the Jewish resistance movement.

On a positive note the two central performances are perfectly pitched and executed. Having impressed in A Prophet Tahar Rahim one again delivers a convincing and human essaying of a young man caught up in a world that is alien to him, facilitating a change in both his personality, priorities and resolve. Veteran Michael Lonsdale was seemingly tailor made for the role of Ben Ghabrit both aesthetically and the gravitas he brought to the screen for a man with a long career, proving to be quite the delight with his cheeky flying in the face of the Nazi’s imposed authority.

Free Men achieves plenty in bringing to light a war story that has hitherto remained untold and does so with reverence and respect but feels incomplete, just falling short of the high standard set by other wartime dramas that have delighted us from Europe.