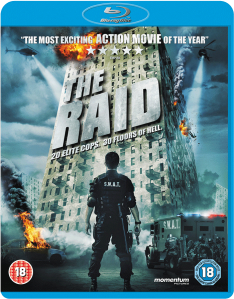 In the slums of Jakarta stands a derelict apartment block which has become the headquarters for the criminal element of the city. Controlling operations is a drug lord named Tama (Ray Sahetapy) who rules from the top floor of the building, his reign of terror is so effective even the police refuse to go anywhere near it. So, a SWAT team lead by Sgt Jaka (Joe Taslim) enters the building under the darkness of dawn but Tama’s surveillance system spots them. Carnage ensues with most of the squad wiped out, save for a small group including plucky rookie Rama (Iko Uwais) who know must fight to escape.

Indonesia has not exactly been a prominent force of World Cinema or even the recent boom of Asian cinema – until now. Directed by Indonesian based Welsh born Gareth Evans, who also helmed the cult hit Merantau, The Raid looks set to remind international audiences of Indonesia’s presence with a hard hitting, violent, action packed slice of martial arts mayhem. For anyone who thought Tony Jaa had lost the plot with his physically impressive but directionless Ong Bak sequels should rejoice in the discovery of the fight genre’s latest ass kicking human dynamo Iko Uwais.

The plot is, as you would expect, purely functional with little in the way of depth or development and thus is the film’s only downside. The nearest we get to some kind of emotional investment is through learning about Rama’s pregnant wife at the start of the film, otherwise all you need to know is that a bunch of armed law enforcers are about to clash with a group of drug dealers, killers and other unsavoury sorts. Perhaps that is underselling it a little as there is some intrigue surrounding the loyalties of a couple of characters but let’s face it, the fights are what the punters are paying to see.

With the action taking place almost exclusively inside the tower block with a new challenge to be met as ascension progresses towards the big bad boss at the top, there is a video game feel about the proceedings, with weapon wielding thugs pouting out of lifts or leaping out from behind closed doors ready to put an end to our protagonists. For the first thirty minutes or so while both sides still possess a near full compliment of members, a lot of the action revolves around shootouts and explosions, including one of the more ingenious usages of a fridge! Once the numbers dwindle, the focus shifts towards physical combat and boy, does it ever get physical!

Choreographed by Uwais and Yayan Ruhian – who plays Tama’s second-in-command Mad Dog – the fight scenes adopt the no wires, no CGI, no frills approach which made the aforementioned Ong Bak a hit and if you can believe this, turn it up a few notches. Incorporating the martial art of Silat with the odd MMA move, kung fu and straight up gun and knife violence, Uwais and his co-stars deliver some of the most brutal and lightning quick action seen this side of Bruce Lee at his best, with touched of Jackie Chan’s prop related stunts thrown in for good measure. To say Evans got his pound of flesh from his cast is an understatement; arms, legs, necks and backs are snapped and broken with alarmingly carefree regularity, throats are slashed with nary a flinch (on both sides of the fight – the heroes are just as stab happy as the villains) and bodies are slammed into every conceivable surface available.

During some of the “catch a breath” moments in between the brawling, Evans is keen to maintain the momentum with some unnerving drama. One suitably chilling moment comes when Rama and Jaka are hidden behind a plasterboard wall and Mad Dog is stabbing it with a huge machete. I won’t spoil it but this was a masterful example of heart-stopping tension. In contrast, if the ending feels a little bit of a damp squib it is because Evans has opted to forego the clichéd “last man standing” denouement for something with a bit more realism, much like how Rama doesn’t escape unscathed and is just as beaten as bruised as everyone else, he’s just a little more alive than they are.

Before being shoved in front of a camera to film Merantau, champion Silat practioner Iko Uwais was working as an engineer for a telecoms company when Gareth Evans discovered him whilst making a documentary on Silat. His first film may have gone largely unnoticed but with The Raid making all sorts of noise since its release, it is very likely Iko Uwais will soon be a name that crops up with some frequency from now on. With his exceptional fighting skills and babyface looks he has the right ingredients to pick up where Tony Jaa dropped the ball. If his next film has a deeper and more involved script to flesh out his character, Uwais could be the next breakout action star.

Be under no illusion that The Raid is high art – it is the blood soaked, hyperactive, bone crunching, stripped down, pure unadulterated action film we’ve all be waiting for to wash away the bad taste the proliferation of CGI assisted nonsense that has polluted the genre. Watch it kick ass or it will kick yours!

Audio Description for the Visually Impaired

Behind The Music with Mike Shinoda and Joe Trapense

2 thoughts on “The Raid”