The Kid With A Bike (Le gamin au vélo) 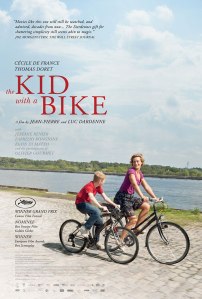 The Kid With A Bike (Le gamin au vélo)

12 year-old Cyril Catoul (Thomas Doret) has been abandoned by his father Guy (Jérémie Renier) and left to live in a state run youth house. Absolutely determined to find his father and prove everyone wrong, Cyril tries to track down his father at all costs leaving no stone unturned. Whilst trying his luck at a health clinic, the youth workers track Cyril down where he tries to run away but he runs into local hairdresser Samantha (Cécile De France) who takes pity on Cyril.

Samantha finds Cyril’s bike and returns it to him at the home the next day, although Cyril still believes it was stolen from his father but he takes a shine to Samantha and asks to stay with her on weekends, to which she agrees. But when they finally track Guy down and he rejects his son, Cyril goes off the rails.

Belgian brothers Jean-Pierre and Luc Dardenne first envisioned this tale as fairy tale with young Cyril seeing Samantha as a good fairy helping him escape from an unpleasant upbringing. Some small traits of this original idea still exist in the final version despite it being transformed into a gritty slice-of-life drama, much more in line with their other works.

With a recurring theme of a bicycle being a precious possession which is stolen on a few occasions during the film, there are some nods towards Vittorio De Sica’s perennial classic The Bicycle Thieves.

Cyril refuses to believe that his father has abandoned him, his faith being so strong to refute every piece of evidence which confirms this. He is also a law unto himself, regularly skipping school to find his father and resorting to violence to avoid capture from the youth workers. When he is granted his weekend stays with Samantha, the pair together manages to find Cyril’s father after the boy spots a personal ad in a café selling his bike.

Naturally Guy has all the excuses in the book ready for why he can’t take on Cyril which leads to another violent outburst, this time a self inflicted one. After Samantha is granted permanent foster custody of Cyril, the boy meets up with the local hoodlum known as The Dealer (Egon Di Mateo), who nurtures Cyril’s rebellious side with devastating consequences.

The film wastes little time throwing the audience right into the story without a trace of exposition needed. Cyril is making a phone call expecting his father to be on the other end while the youth home workers try to convince him the recorded message telling him the number cannot be reached actually means something. Even without the character backgrounds being explored, one can get an immediate grip on how everyone works.

Without any signs or mention of abuse toward Cyril, it is evident that Guy is a deadbeat dad, yet Cyril still holds him in high regard. Samantha is the fairy godmother, whose immediate acts of extensive generosity defy logic and reason, as does Cyril’s mutual appreciation but with just 87 minutes on the clock, we have little time to ponder this and just go along with it. While the early signs of improved behaviour are positive, it is Guy’s rejection which pushes Cyril into Samantha’s arms until, he meets The Dealer.

Aside from Samantha’s almost saintly interest in Cyril’s well being, other elements of the original fairy tale concept are more visual. Near the end of the film Cyril is chased by a young lad he attacked and he runs into some nearby woods, which represents a large and strange world for the little chap to explore and feel overwhelmed by.

The slightly surreal and virtually improbable ending fits in with this fantasy concept, but again is open to interpretation in its symbolism of the direction Cyril wants his life to head in. Up until this point, the film plays it in a very straightforward manner, with the authentic scenarios free from pretension unnecessary sentimentality, presented in a naturalistic style which recalls the grim works of British auteur Shane Meadows than the Gallic style the Dardennes are noted for.

Cécile De France has become a versatile and reliable hand over the past decade and this role solidifies that reputation, managing to emote convincingly and give credence to her character with sheer body language over extensive dialogue. Young Thomas Doret in his debut role could be to France cinema what Thomas Turgoose is to Shane Meadows, making an assured and irrepressible mark in his first outing.

The Dardennes may be back on familiar ground with The Kid With A Bike but that hasn’t stopped them from delivering a reaffirming and poignant dissertation on parenthood, broken trust and blind faith. A minor social realist treat.