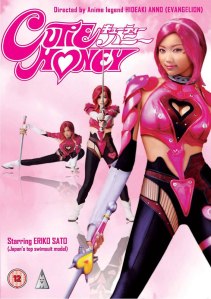 Honey Kisaragi (Eriko Sato) is your average, attractive well meaning office lady with a secret: one touch of her special necklace and the magic words “Honey Flash!” and she transforms into the sexy, pink haired, leather attired super heroine Cutie Honey!

The evil Panther Claw gang, lead by the vain Sister Jill (Eisuke Sakai), plans to steal Honey’s AI System necklace (“ai” being the Japanese word for “love”) – designed by Honey’s father after he rebuilt her following a near fatal car crash – and use its power to spread their evil across the world. An ambitious and deadly serious police inspector Natusko Aki (Mikako Ichikawa) who is investigating Panther Claw doesn’t take kindly to Honey’s presence when Honey’s uncle is kidnapped by Panther Claw, so she begins investigating her too. Deciding eventually to work together, Honey and Natsuko appear to share another common bond: the mysterious reporter Seiji Hayama (Jun Murakami) who appears to know all about both Honey and Natsuko. Upon learning that Panther Claw was responsible for her father’s death, Honey vows not only to stop them but avenger her father.

Originally created by the prolific Go Nagai in 1973, this is the first adaptation of Cutie Honey to hit the big screen following a number of Anime and Manga adaptations over the years. For the best part of 30 years it was deemed impossible to recreate as a live action production. Fast forward to 2004 and boasting a bespoke filming technique known as “Honeymation” – a combination of live action images and CGI animation – the impossible finally became possible. Helming the project was the creator and director of one of the most controversial Anime series ever Neon Genesis Evangelion, Hideki Anno – an interesting choice considering how that series was an exploration of existentialism, mortality and angst. Yet Anno delivers a kitsch and colourful slice of camp silliness befitting the Cutie Honey moniker.

The story may appear flimsier than some of the material won by our heroine but over the course of 90 minutes, Anno tries to inject a touch of depth to it. Honey is a remarkably perky and positive person who aims to please and as Cutie Honey, her goal in fighting crime is to abolish hate in the world; yet once she learns of the Panther Claw’s involvement in her father’s death, Honey becomes consumed but the very hate she wishes to eradicate. Similarly, humourless, all business copper Natsuko slowly finds herself lightening up the more she spends time with the infectiously joyous Honey. The pervading theme of the story does appear to be the importance of embracing love and not hate which, while an admirable message, does unfortunately drag down the film’s denouement when an explosive climax to the preceding punch up would probably have served better.

The effects are quite impressive and the aforementioned “Honeymation” creates something different from your usual CGI fare found in Hollywood films, although the action scenes and overall aesthetic will immediately draw comparisons from many – and not unjustly – to Power Rangers. Honey is not short of a heroic pose when necessary and there are the bright and colourful transformation scenes; the villains are painted up and adorned in elaborate costumes that would make Elton John envious – but since this film refuses to take itself seriously the viewer should also follow suit.

Of course this means the villains all cackle and laugh in an exaggerated pantomime style, delivering their lines with such pomposity one would suspect the actors believed they were reciting Shakespeare instead. Yet this is not a case of them deliberately hamming up, rather an understanding of the type of film this is and adapting accordingly. This knowing approach therefore makes Cutie Honey feel as much an affectionate parody/homage to the Super Sentei genre as is it an authentic addition into the franchise. The fact that lead antagonist Sister Jill is play by a male tells you all you need to know on that front.

For former Gravure Idol Eriko Sato, in her first major starring role, neither aspect of Honey’s twin personas exactly lend themselves to much in the way of emotional depth but Sato equips herself well, displaying a competent sense of comic timing. However, Anno couldn’t help but exploit Sato’s modelling past as she spends the majority of the film in various skimpy outfits (ironically her Cutie Honey outfit is the least revealing), appealing largely to cosplay fans in the process. To set the tone of the film, the opening sees Honey run down the street in just her underwear! Thankfully Sato has eschewed relying upon on her (not inconsiderable) looks and has since applied herself to improving as an actress. Of the rest of the cast acclaimed stage actress Mikako Ichikawa who provides a wonderfully stoic performance as Natsuko and Jun Murakami is well suited as Hayama. Eagle eyed viewers will spot cameos from creator Go Nagai and J-Pop princess Kumi Koda, who also sings the theme tune.

However, as much fun as this film is, it is not without its flaws. As alluded to earlier, director Anno seemed to channel his Evangelion self for the film’s ending which features a discussion about the merits of love over an action packed finale. The film also sags a little in the middle when the three lead protagonists find themselves at emotional crossroads and get a bit maudlin from downing copious amounts of sake to forget their troubles.

Bright and bubbly with plenty of explosive action and its tongue firmly planted in its cheek, Cutie Honey is a slice of easy on the eye, escapist OTT fun Japanese style.