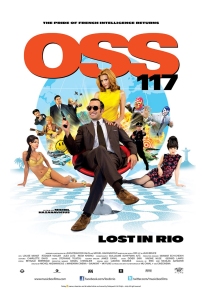 France’s top secret agent Hubert Bonisseur de La Bath, alias OSS 117 (Jean Dujardin), returns with a new mission that sees him on his way to Brazil to deliver a 50 000 francs payment to an exiled Nazi, Professor Von Zimmel (Rüdiger Vogler), who is blackmailing the French government with a microfilm in his possession which contains the names of French Nazi sympathisers. Teamed up with Israeli agent Dolorès Koulechov (Louise Monot) who wants to take Von Zimmel back to Israel, Hubert finds a lot more than he bargained for in Rio.

The thing about French humour is that it is very hit or miss for a lot of us “outsiders” and this second 60’s spy spoof from the team of Michel Hazanavicius and Jean Dujardin – the very same duo who won over the world with The Artist – is a prime example of that. A lot of the humour ranges from the laugh-out-loud funny to the overplayed and predictable, sometimes given the idea of a half hour sketch comedy stretch beyond its natural limit. On the plus side, it is such a well made and detailed tribute to the genre it is lovingly spoofing that I’m sure this won’t be too much of a distraction or sully the enjoyment factor for some viewers.

Being a spoof the plot is typically thin on the surface but soon spiral out of control through the series of misadventures our inept and vain hero endures. A running gag forms from the opening scene in which Hubert single-handedly wipes out an entire gang of Chinese villains in a ski chalet in Switzerland and various “family” members of the deceased pop up in Rio to gain revenge, usually with disastrous results. Arriving in Rio Hubert’s attempts to drop off the blackmail money result in him being diverted by another party interested in Von Zimmel leading to a twisting plot where no-one seems to be trusted. Since Von Zimmel is hard to find, Hubert and Dolorès are put on the trail of Von Zimmel’s son Heinrich (Rüdiger Vogler) who is now a hippy. This leads to an uncomfortable moment where Hubert gets stoned at a beach party and ends up involved in an orgy where he gets some action he’d rather forget.

The usual Bond-esque traits pop up – the women, the cars, etc – but are given a modern kick in the teeth via feminist Dolorès, who lets Hubert have it with both barrels for his sexist, racist and other politically incorrect attitudes. The usually celebrated macho heroics are also ridiculed in one of the funnier moments of the film involving a crocodile and Hubert’s attempts at providing dinner. Other humorous moments include Hubert’s choice of outfit for a costume ball and the invalid vs invalid chase at the hospital. While some gags are very clever and well crafted the humour sadly peters out lot earlier than its predecessor Cairo – Nest Of Spies. Ironically the origins of this film lie in a series of novels and genuine 60’s “Eurospy” films featuring agent OSS 117 but they were “serious” affairs.

Much like The Artist part of the charm and success of this film lies in its faithful recreation of yesteryear and, as before, this is not just limited to the costumes, props and make-up but also in the film’s production. The colour pallet has that muted tint 60’s colour movies have while the music, on screen titles and other production aspects are straight out of this period. The only things that spoil it are the profane language of an American agent and the ridiculously large implants of Reem Kherici as femme fatale Carlotta. Otherwise the replication of the past is pitch perfect with Jean Dujardin looking as much at home in the 60’s as he did in the 1920’s!

OSS 117: Lost in Rio will either be a welcome sequel for some fans of the first film or a joke too far for others, but its dedication to recreating the cinematic experience of a past era is to be seen and commended.