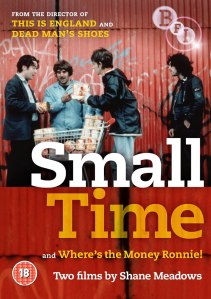 A gang of small time crooks in a small town in the Midlands are starting to fall part due to the personal lives of gang leader Jumbo (Shane Meadows) and Malc (Mat Hand). Malc’s girlfriend Kate (Dena Smiles) wants him to stay at home and spend more time with her and their children while Jumbo’s girlfriend Ruby (Gena Kawecka) finds it hard to leave him despite the beatings he constantly gives her.

Shane Meadows has lead something of a resurgence in gritty, kitchen sink realism British films over the past decade with his seminal 2006 outing This Is England raising the bar. This is his first feature length film from 1996 and while the blueprint for his later works can be found here, this 60 minute outing is very raw and unfocused. The intention seems to be less about telling a story and more about showing the flaws of the motley crew of a cast. The gang see themselves as a semi-Robin Hood type outfit, in the sense that they steal from the rich but sell half price to the poor. The crime aspect of this tale bookends the film while the rest is about the interaction between the two bickering couples.

Jumbo may not look much but his is a bully although this is mostly towards Ruby who resents the beatings but in typical victim fashion, thinks it is her fault and stays with Jumbo. Kate is angry at this but does nothing other than mouth off about it while Malc is just drippy. The other members of the gang only pop up whenever there is a party of a job doing and offer little to the overall story. Suffice to say there is no-one likeable among the characters and even the attempts of humour do nothing to life the dour mood. The dialogue – presumably largely improvised as much of Meadows’ works are – is “F” word heavy and lacks any kind of wit or substance. Meadows likes to base his films on his real life experiences which makes for a sad indictment of our country if this is an example of life in the North in the 90’s (not that much has changed since then).

Small Time is an interesting film to watch however even if the reflection in the mirror it holds up to society isn’t a pleasant one to behold. It shows a fledgling filmmaker who aspires to stand out from the crowd and put on film the truths about this country and the potential is abundantly clear. Don’t expect a prototype This Is England when viewing this film as you won’t get it but as a retrospective curiosity which shows the genesis of a bold and ground breaking British filmmaker, it’s worth at least one look.