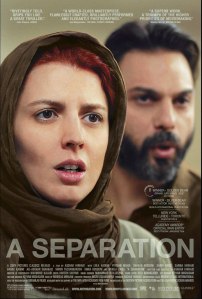 Simin (Leila Hatami) has filed for divorce from her husband Nader (Peyman Moaadi) because she wants to live abroad and give their 11 year-old daughter Termeh (Sarina Farhadi) a better life but he refuses to leave as he doesn’t want to abandon his Alzheimer’s suffering father (Ali-Asghar Shahbazi). Since the judge thinks this reason is to trivial Simin moves out instead leaving Nadir to cope on his own with both his father and Termeh. Simin lines-up a helper, the deeply devout and pregnant Razieh (Sareh Bayat), but she not only finds the job stressful but cannot tell her husband Houjat (Shahab Hosseini) about it, which is just the start of a series of events that spiral out of control for both couples.

Shot in almost a documentary style, Asghar Farhadi’s award wining opus is a simple tale about daily situations which force a couple farther apart whilst ironically bringing them together again. Stuck in the middle is daughter Termeh (Farhadi’s own daughter) whose tacit filial piety to both parents leads her to finally break down and the film ends with her having to make a very difficult decision. The actual separation comes almost immediately when the judge refuses the divorce but it is the fallout which is the conceit of the story.

An anguished Nader loses it with Razieh after she pops out and leaves Nader’s father tied to the bed and locked up for his own safety and throws her out of the house, an act which Razieh claims cause the loss of the child she was carrying, something Nader claims no knowledge of. Revisiting the theme of one of Farhadi’s earlier films Beautiful City, the remainder of the plot is based around Raziah and Houjat’s seek for compensation from nadir in the form of “Blood Money” as well as Nader’s incarceration. Both parties then bend the truth and set off a chain of events for the viewer to piece together as the search for justice continues.

Iran is not exactly the most open indeed place in the world as we know but this is an interesting look at their judicial system which seems totally unsympathetic and overtly formal compared to ours. On a similar note, none of the characters are particularly likeable here but that isn’t the point; the film is about how they deal with the troubles thrown at them within the boundaries of their culture, which may seem bizarre and oddly dispassionate to us westerners, but the beauty of it is just how natural it all appears. Even when the various arguments are purely logical and the refusal to accept them is frustrating, there is no sense of artifice about these scenes at all. To that end this film is a triumph for naturalistic cinema and the power of simple storytelling via compelling performances from the well assembled cast.

Might be too drab for some but the Oscar nods this has received aren’t undeserved from this person’s point of view.