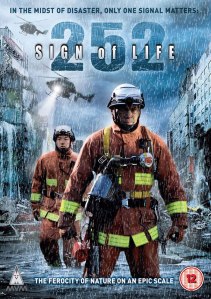 Having been recently struck by a huge earthquake, Tokyo was settling back to normalcy when meteorologist Saki Umi (Yu Kashii) notices that the temperature is rising in the Pacific Ocean. However she doesn’t reckon it will be of much concern so her boss orders her to ignore it. Big mistake, as this was a presage that a typhoon is heading to strike Japan’s metropolis. First signs come in the form of a violent hailstorm followed by a powerful tidal wave that floods the streets and the underground system of Tokyo, leaving many dead both above and below ground. While the rescue team work against the clock as the typhoon approaches, a small group of survivors trapped in the underground see their hopes of being rescued fading.

The title refers to the Japanese equivalent of Morse code used by rescue workers at a disaster scene to alert others that there are survivors: 2-5-2. And as it happens, our main protagonist, Yuji Shinohara (Hideaki Ito), is a former rescue worker whose past skills are about to come in very handy indeed. Yuji is on his way to meet his wife Yumi (Sachiko Sakurai) and their deaf-mute daughter Shiori (Ayane Omori) in Ginza when the tidal wave hits. Mother and daughter are separated during the panic but luckily Shiori finds herself in the underground station just as Daddy arrives. They discover three other survivors – Korean woman Kim Su-Min (MINJI), small time inventor Keisuke Fujii (Yuichi Kimura) and stroppy medical student Makoto Shigemura (Takayuki Yamada). Above ground Yumi is constantly on edge worrying about her family while rescue worker brother-in-law Shizuma Shinohara (Masaaki Uchino) is unable to offer her any hope as his superiors fear that any attempts to go underground would prove fatal and they don’t want to risk any more lives. Um…Isn’t that what rescue workers are paid to do?

It’s things like this that make this film frustrating and difficult to take seriously; that and the contrived flickers of hope that our trapped survivors are presented with. For example, Su-Min suffers huge blood loss from an abdominal rupture and needs a transfusion. Shigemura not only just happens to share Su-Min blood type but chooses now to reveal his medical history. And who happens to have the suitable equipment including a pump and water purifier? Why, inventor Fuji and his fantastic fish tank gizmo that he hopes will make him millions. How’s that for convenience? These weak plot devices deprive us of any real sense of drama or tension since a solution to a crisis is almost immediately found. And – without spoiling anything – there is a no mid film demise for any of the main characters which again would have amped up the gravity of their struggle to survive.

Another missed opportunity is with the butting of heads between the rescue team and their chief who constantly blocks any suggestion of them actually doing their job for the fear of it being too dangerous. Plenty of capitulation from the workers and not enough growing a set and defying the pompous superior for this reviewer’s tastes. Just as well Yuji is on the case, seeing is he is – literally – the hero of the hour and clearly a god amongst men if the ludicrously cheesy and groan inducing finale is anything to go by.

Since this was such a huge project, a number of faces familiar to Japanese TV audiences were drafted in to fill out the cast, either as main players or small cameos. Whilst the leading ladies, Sakurai and Korean popstrel MINJI (who also provides the closing song), manage to convey their emotional distress with some credibility, Yu Kashii sports the same blank gormless expression on her face that she has for seemingly every role she plays. Sadly the men are less heroic and by large more wooden thanks in part to their cardboard characters. The actual star of the film is young Ayane Omori as deaf-mute Shiori, who emotes for more adeptly than her adult co-stars without any dialogue and is by far the most sympathetic and believable character in the entire movie.

At almost two-and-a-quarter hours long, 252: Signal Of Life is a film with lofty ambitions that were just out of reach. It’s a valiant effort and not a total disaster (pardon the pun) but the result is a rather heavy handed attempt to put across a simple message. Definitely a film to kill some time on a Sunday afternoon if it was on TV but hardly an essential viewing experience.