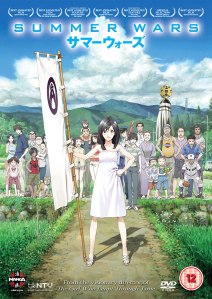 High school student and maths whiz Kenji Koiso is also a moderator for the online virtual reality world of OZ, a global community that has become an inescapable and vital fixture in modern society. With the summer break looming, Kenji receives the offer of a lifetime from popular babe Natsuki Shinohara who invites him to accompany her to her grandmother Sakae’s country house to celebrate her 90th birthday with her extensive family.

Ignoring the possibility of an ulterior motive, Kenji readily agrees but finds it hard fitting in when he arrives due in part to the overflow of relatives staying there and their varied and huge personalities. On the first night Kenji receives a text message containing a number code which he assumes is a maths problem so he solves it. The next morning Kenji awakens to learn that OZ’s mainframe has been hacked into and corrupted and since it was done via his account, he is the prime suspect.

Mamoru Hosoda is one of the current crop of Anime directors lauded (or burdened) with the mantle of heir apparent to the throne currently occupied by the legendary Hayao Miyazaki. Summer Wars is Hosoda’s follow up to his hugely successful hit of 2006 The Girl Who Leapt Through Time, and while there is an aesthetic similarity between the two, direct comparisons are not so easy to make.

The world of OZ, for example, is a surreal and idiosyncratic domain that gives its users a physical existence in the form of bespoke avatars, more akin to the Matrix than Facebook or Twitter. Subsequently the character designs eschew the “typical” Anime template while the animation is CGI-centric, allowing Hosoda to let his imagination run riot and develop a whole plethora of inventive possibilities. Yet despite this overt clash in styles everything works within the context of the story.

There are many aspects of society and communication reflected upon here. OZ represents the modern day propensity for people to submerge themselves into a fictional world of escapism and fantasy which allows them to adopt or portray a character which is the polar opposite of their natural personalities. However Hosoda is keen to point out that perhaps in this day and age of technological marvels we are perhaps becoming too reliant on machines and virtual worlds for our own good.

When OZ falls foul of a corrupt artificial intelligence known as the Love Machine which infiltrates the OZ mainframe, it is not just the virtual community that suffer – all aspects of daily life are affected too. Mobile phones cannot be accessed due to accounts being blocked; Sat Navs become (even more) uncooperative; emergency services are victim to false call outs and so on. With the modern generation being almost servile to technology, widespread panic ensues.

Leave it up to the indomitable spirit of granny Sakae who equates Love Machine’s attack on OZ to war, using the many contacts and acquaintances she has accumulated over the years to revert back to good old human effort and community to spirit to restore some semblance of calm and order.

Ironically then it is this same ethos that sees Kenji rally the troops to employ their network of modern technology contacts and suppliers to provide powerful opposition to Love Machine in a bid to reclaim the stolen accounts of the OZ community and restore order to both the virtual and real world. But don’t be fooled – this is not just a family friendly and more accessible take on the Ghost In The Shell world of cyber terrorism, this is a tale of family values and broken relationships within that oeuvre.

The black sheep of the family is computer programmer Wabisuke Jinnouchi, the adopted grandson of Sakae and uncle to Natsuki, who returns to the fold after a ten years absence, receiving a less than warm welcome from his family outside of Natsuki. Wabisuke’s influence over the events of this story is far greater than first impressions suggests and we have a man who has many bridges to build before he can be accepted by his kin once again.

Despite the intention to make a family movie, it is fair to say that some aspects of Summer Wars are darker than its whimsical predecessor. When Love Machine rules supreme over OZ it manifests itself as a humungous and black hearted beast, demonic in appearance and its parting shot of certain destruction of the living world is not exactly delivered wrapped in a pink bow.

Death too is explored here with much empathy and pathos, yet Hosoda still manages keep up a steady flow of frivolous and occasionally manic comedy moments that occasionally threaten to undermine the general sense of realism created, especially prevalent in the scenes of the huge family congregation.

That said the marriage of hi-tech thrills, human emotion and random laughs is an effective one, resulting in a satisfying viewing experience, bolstered by some stunning visuals which boast some exquisite backgrounds and artwork of intricate detail and a breathtaking CGI depiction of the esoteric cyber world of OZ. A mention for Akihiko Matsumoto’s sumptuous soundtrack is also required, serving as the glue that holds this project together.

Perhaps the “next Miyazaki” plaudits are a little premature to be bestowed upon Hosoda for the moment, but Summer Wars is another sign that his name deserves to be among the front runners – although this reviewer sees no reason why he can’t be referred to a the “first Mamoru Hosoda” based on the evidence presented before us. Unquestionably a high recommendation for this title.